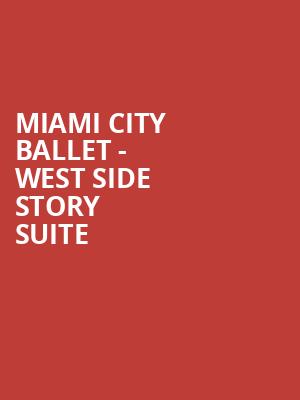 When Musical Theater meets the Art of Ballet

The thrill of that classic teenage rivalry between the Jets and the Sharks plays out through the elegance of ballet, with Miami City Ballet's stunning interpretation of West Side Story this April! Join the MCB and witness some of the musical's most iconic moments including "Maria," "America," "Somewhere" and "Tonight". created by the late, great Leonard Bernstein.

One of musical theater's leading composers of the 20th century, Bernstein was one of the first born and bred American composers to receive international acclaim for his works. Although forever synonymous with his triumphant West Side Story, he also composed scores for Peter Pan, Candide and On the Town.

Sound good to you? Share this page on social media and let your friends know about Miami City Ballet - West Side Story Suite at Dreyfoos Concert Hall.