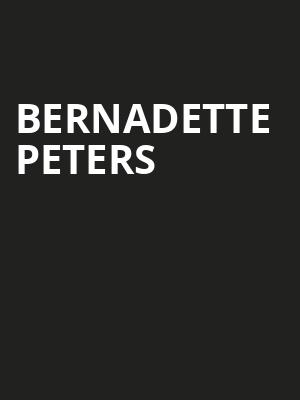 In an illustrious career that started in 1967, to look at her it's hard to believe that this Tony Award-winning star is 66 years of age. Bernadette Peters has dazzled audiences and critics alike with acclaimed performances both on stage and television, in concert, and album recordings. The three-time Tony award-winning Broadway icon is taking her extensive songbook on tour around the country, where she will sing hits from Rodgers and Hammerstein, and of course, Sondheim. Last year saw Peters perform a series of solo concerts in Australia, with the Syndey Morning Herald proclaiming that, "...it is easy to see and hear why, for 30 years, Bernadette Peters has probably been musical theatre's finest performer."

Outside of her Broadway and recording commitments, Peters is a staunch supporter of animal welfare, having set up an annual dog adoption drive with her friend, Mary Tyler Moore called Broadway Barks. Her activism also inspired her to author children's books, based on her own rescue dog called Stella. She also appeared as a guest star in the hit TV show Smash with Debra Messing and Jack Davenport.

Anonymous: “A thrill to get so close”

While clearly not theven voice of 30 years ago, the performance and performing... more

What a delicious evening! Bernadette Peters had the audience eating out... more

Sound good to you? Share this page on social media and let your friends know about Bernadette Peters at Dreyfoos Concert Hall.